Cookies
Cookies are small text files created by a web browser when a user visits a website. Cookies are stored on your device. Some cookies are only stored for the duration of your site visit whilst others are stored for longer periods of time. The information stored in a cookie is transferred between a website and the browser to provide enhanced functionality and improve the user experience when using the website. Komatsu may collect certain information such as browser type and operating system through the use of cookies to improve your experience. You acknowledge this by using our website.
I Agree Privacy Policy
×
Tuesday, 15 December 2015 09:31 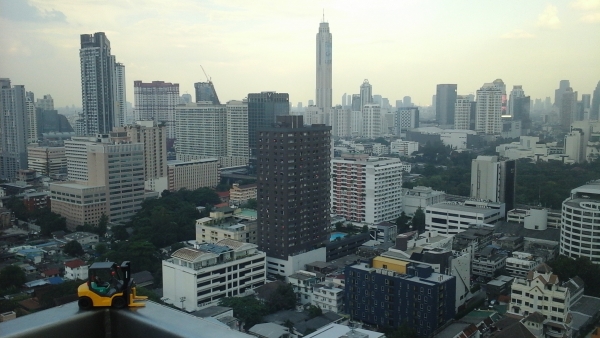 A promotional model forklift meant as a gift to customers has been traveling the world thanks to the fun-loving staff at our Brisbane Branch.

Brisbane area manager Tony Pratt said that Felix, although only 4 cm long, 20 cm wide and 30 cm high, has seen many famous international sites and may even go for a walkabout in Australia next year.

"A few years ago, we wanted to see how far we could take a little model [of our] Komatsu FG25. So far, he has managed to travel the globe: New Zealand, Hawaii, New York, Japan and his most recent visit, Thailand."

"We have photos of it on the Brooklyn Bridge, Route 66, Sunset Strip. It is now a few years old but travels well and has been in snow and a heat wave."

Kris Davey, service manager at Komatsu Forklift Brisbane, was the one who originally picked up the forklift model, which was produced about five years ago as a gift for customers, and took it with him to the US.

To date, seven staff have taken Felix with them on their holidays.

Tony claims Felix had the best time with him when they went to Disneyland in the US "where he had a lot of onlookers when he was getting his photo taken".

The tiny forklift currently sits above the noticeboard at the Komatsu Forklift Brisbane office in Sumner Park. At Christmas, he’s following a staff member on his first cruise, Pratt says.